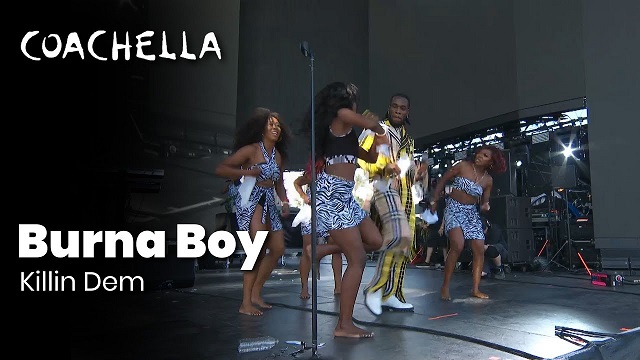 VIDEO: Burna Boy performs ‘Killin Dem’ at Coachella 2019
African giant, Burna Boy who was headlined for this years’ Coachella Valley Music and Arts Festival performed “Killin Dem“; a track done alongside Zlatan.
Nigerian music export, Burna Boy showcases the Zanku (Leg Work) dance step at the biggest music fest in the World. Burna Boy intentionally dropped off the mic and had the cameras positioned on his legs as he teach them the global dance step. It is Zanku to the World indeed.

In a related news, Burna Boy gears up the release his forthcoming studio album “African Giant“, expected to be out sometime this year.
Coachella is one of the biggest and best music festivals in the United State and in the World. People gather deep in the Coachella Valley on the polo grounds in the desert and dress to impress with Coachella fashion, which includes the notable flower crowns.
DOWNLOAD AUDIO/MP3
Watch and share your thoughts below;